The city of Chachapoyas:

Chachapoyas (founded as San Juan de la Frontera de los Chachapoyas, September 5, 1538) is a city in northern Peru, capital of the province of Chachapoyas and the department of Amazonas. It rises at an altitude of 2,334 meters above sea level on the eastern slope of the Andes mountain range, in a plain of the Utcubamba river basin, a tributary of the Marañón river. It is the most important city of the Department of Amazonas.

The Plaza de Armas is located in the center of the city, where the bronze fountain of colonial origin stands out. Among the buildings of the periphery, stands the headquarters of the Archbishopric and its memorable library. The city still maintains, in its constructions, the colonial character of the same. It is one of the oldest cities in Peru and one of the few that still maintains its stately air and Hispanic influence.

Chachapoyas comes from the native word “sachapuyos” which means in Quechua ‘men of the mist’, attributing this name to it by the dense fog that usually covers the hill of Puma Urco, which is in the vicinity of the city.

Former cradle of the Chachapoyas culture, the city was submitted to the Inca Empire in the 15th century and later, after the conquest, it was again founded by the Spaniards under the name of San Juan de la Frontera of the Chachapoyas by Alonso de Alvarado in 1538.

Archaeological site located 32 km SE of Chachapoyas on a high promontory at 3080 masl, from where you have an impressive view of the Utcubamba valley.

Kuélap is an important pre-Inca archaeological site located in the northeastern Andes of Peru, in the Province of Luya, built by the Chachapoyas culture.

It forms an architectural ensemble of large stone characterized by its monumental condition, with a large artificial platform, oriented from south to north, seated on the crest of calcareous rock at the top of Cerro Barreta (at 3080 meters above sea level).

The platform extends along almost 600 meters and has as perimeter a wall that in some points reaches 20 meters in height. It is estimated that its construction had to start around the tenth and eleventh century, coinciding with the period of flowering of the Chachapoyas culture, and its occupation had to culminate towards half of the sixteenth century.

Its colossal walls and its complex interior architecture are evidence of its function as a well-organized population group, which includes administrative, religious, ceremonial spaces, defensive structures and permanent residence. It housed 420 circular houses estimated to house about 3,500 people.

It was discovered in 1843 by Judge Juan Crisóstomo Nieto while performing a diligence in the vicinity of the current district of Tingo, but was not properly studied until the late nineteenth century.

Inca Tupac Yupanqui arrived with his troops in 1470, but the Inca army was initially unable to subdue the Chachapoyas.

The base of the mountain is reached from the road from Chachapoyas to Leymebamba, leaving the paved road at Nuevo Tingo, near the Utcubamba riverbank. From there you can access in three ways:

The sarcophagi are located 48 km NW of Chachapoyas. This archaeological site contains the best example of the funerary style of this kingdom. It is a set of 7 anthropomorphic sarcophagi 2.5 m high, known as “purunmachus”, built from a mixture of clay, stones and sticks, and painted in white and red ocher colors. They are installed on a cliff about 200 m high on the Utcubamba river.

The place was discovered in 1984 by the archaeologist Federico Kauffmann. To get there you have to take the road to Lámud. From there you have to walk 40 minutes to a ravine, from where you can see the sarcophagi from a nearby location.

This archaeological site, which is located 65 km from Chachapoyas, are funeral constructions made as small houses painted red and white. The mausoleums of Revash are a necropolis belonging to the Chachapoyas Culture. They are located in the Santo Tomás district.

They were collective sepulchers that occupy natural caves or excavated in the rocky wall of an imposing ravine.

Described by the Peruvian archaeologist Federico Kauffman Doig, who maintains that the mausoleums are replicas of the houses where the people lived in the area.

Painted red and cream, some have pitched roofs, without being necessary, because before possible rains the hill served as protection. Some others have two levels and have T-shaped, cross-shaped or square windows. Part of the mausoleums are painted in red with circles, flames and other magical symbols.

Located at 2800 masl, it takes about 20 min. By car from Hierba Buena to reach the start of the trail that takes an hour and a half to climb to the best watching point.

The Leymebamba Museum, inaugurated in June 2000, houses more than 200 mummies and their funerary offerings, recovered in 1997 from the Laguna de los Cóndores through the emergency archeological project directed by the Mallqui Center.

The rescue tasks allowed to recover for the local history a valuable archaeological collection that was in risk of disappearing due to the vandalic action of huaqueros and unscrupulous visitors.

Based on an initiative of The Bioanthropology Foundation Peru-Mallqui Center, the construction of the Leymebamba Museum was possible thanks to the financial contribution of a group of Austrian citizens and other private donations from Finland, Italy and the United States, as well as important contributions from from the Institute for Bioarchaeology, the von Hagen family and the Discovery Channel.

The local community contributed their work in tasks and construction materials. The town of Leymebamba is the owner of the museum and is represented by a Civil Association. The administrative and professional work in the museum is done by the Mallqui Center. It was built using local architectural techniques such as mud walls with wooden roofs and tiles, complemented with modern technical resources to meet the needs of conservation and exhibition of archaeological materials.

Most of the cultural remains that are exhibited correspond to the Chachapoya culture and the Inca domain in the area. It also has a room dedicated to traditional continuity in the region, and interesting anthropological details of the Chachapoyas.

The fourth highest cataract in the world is located in Amazonas, in the Peruvian east. Announced by the German citizen Stefan Ziemendorff (32) during a press conference in the auditorium of the municipal palace of Chachapoyas, after carrying out a series of expeditions in the district of San Pablo. It is the Gocta waterfall, a name given by the inhabitants of the area. This does not appear with a name on any map to date, because of its remoteness. It was also kept secret by the local men, as the tradition said that it had magical powers.

A walk of 3 and a half hours or 5 hours to more, depending on your physical strength, takes you to the Waterfall, either by San Pablo Valera or by Cocachimba respectively.

Taking into account that there are multiple lists of the highest cataracts in the world made with different criteria, the list of the National Geographic Society was taken as a base, published in 2005. This determined that there are only three higher cataracts than Gocta: the Angel Falls in Venezuela (972 meters), the Tugela falls (South Africa, 948 meters) and, also in the province of Amazonas, in the Cuispes district the Yumbilla waterfall (895 meters).

In the middle of a high jungle spot, hidden by the vegetation, the Yumbilla waterfall has remained anonymous, except for local people, for years, until in 2007 it was visited by a group of scientists from the National Geographic Institute (IGN) of Peru, who have confirmed the height of the waterfall, which measures 895.4 meters high, placing it as the third highest waterfall in the world ahead of Gocta also in the province of Bongara.

The Cuispes district, where this resource is located, is home to 200 families, some of whom have begun to provide tourist services related to the rental of horses; food preparation and guide services.

In the upper part of the cataract there is the San Francisco de Yumbilla Cave, where this waterfall appears to be born. The cave possesses an impressive beauty and mystery, it is approximately five meters high, nine meters wide and its depth is unknown as to date the inhabitants of Cuispes have only managed to enter a maximum of 250 meters. The route towards the lower part of the waterfall is a trail that is approximately 5.70 kilometers long that begins in Cuispes and continues towards the lower part of the waterfall. After an hour on the way there is the Mirador “Sal si puedes”, from where you can see a large part of the Yumbilla Waterfall.

The lower part of the waterfall is very impressive because you can see the large cloud of tiny drops that is formed by the collision of water with rocks. 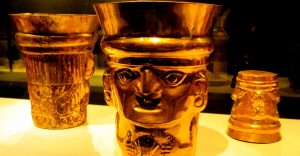 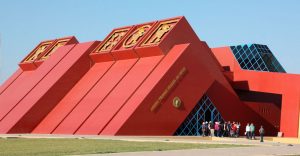 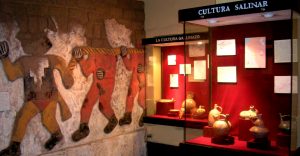