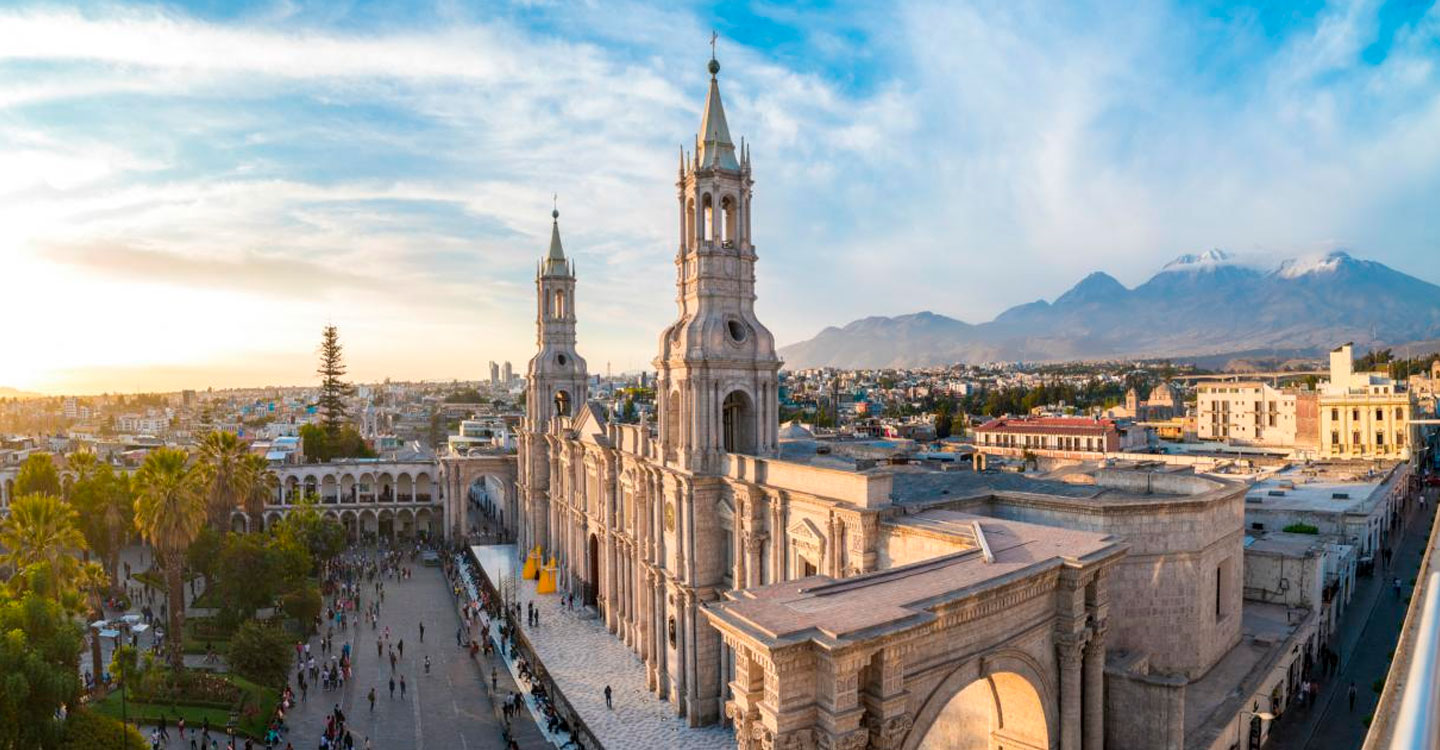 Flying into Arequipa gives a sense of the inhospitableness of the landscape. Surrounded by volcanoes and deep gorges, all in a vast desert, it is easy to understand why the relatively benign geography of the valley of Arequipa, and its vegetation provided by the irrigation of the River Chili, attracted its first Spanish settlers. The city of Arequipa was founded, or at least re-founded, on August 15, 1540, by Francisco Pizarro’s envoy, and in 1541 the king of Spain gave the city the title of Villa Hermosa – beautiful city.

There are a number of stories as to how Arequipa got its name. Some claim that the Inca general Mayta Capac stopped in the valley and moved by its beauty said ‘Are quepay’ -‘stay here’. Other versions say that the Aymara Indians living in the valley called it ‘Ariquipa’, meaning the place behind the pointed mountain, referring to Misti.

The centre of Arequipa is built out of a unique white volcanic rock, sillar, spewed out of nearby Chachani. This gives the city a majestic aspect, especially around sunset when the changing colours of the sky are reflected in the facades of the buildings. Arequipa is known as ‘la ciudad blanca’, ‘the white city’, because of the sillar.

What cannot be denied is the beauty of the city centre. Declared a UNESCO World Heritage Site in December 2000, the city is a wonderful example of the blending of colonial architecture with local conditions. Many of the colonial palaces and houses still stand, despite numerous earthquakes, and can be visited. The churches are particularly beautiful and are a delight to wander round, both inside and out.

Arequipeños like to think of themselves as being separate from, and superior to, the rest of Peru, and much of Arequipa is very traditional and regional. It is even possible to get an Arequipeño passport, although this is no more than regional pride. However, the independence of the city is reflected in its history, which has often opposed itself to directives from Lima. In 1950, students from the Colegio Independencia school went on strike to protest again central government policies. In a march in the Plaza de Armas the police opened fire on the students, killing many. Signs of this are still visible in the clock face of the Cathedral, where a bullet hole from the shooting can be seen.

Arequipa city and towns in the region have spawned a number of renown, and infamous, Peruvian figures, including the writer Mario Vargas Llosa, the former leader of the Shining Path Abimael Guzmán, former president Fernando Belaunde Terry and Vladimiro Montesinos, the leader of Peru’s intelligence service during Alberto Fujimori’s term of office. Montesinos has been attributed with the rise and fall of Fujimori’s reign of power.

Arequipa is a wonderful city to stay for a few days, exploring its beautiful centre and relaxing in the many cafes and bars, enjoying the sunshine. It makes an excellent base for visiting nearby attractions, and should be included on any tour of the south of Peru.