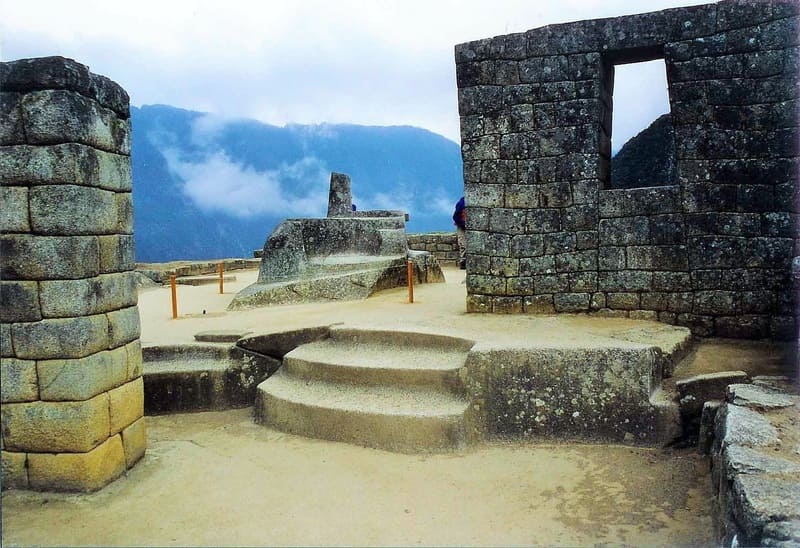 Machu Picchu lies at the heart of imposing peaks covered with luxuriant vegetation. It was built sometime in the last third of the 15th century by the Incas, whose culture was the final phase of six thousand years of Peruvian civilisation. In common with other similar monuments of the period, it was built in relative proximity to Cusco, in the land of Vilcabamba, a region of rugged slopes and cloud forests typical of the Amazonian Andes. The ancient Inca citadel of Machu Picchu is regarded as the most significant archaeological site in South America and one of the finest examples of landscape architecture in the world. Nestled high in the towering Andes Mountains on a saddle between two peaks is this most spectacular and enthralling of Inca citadels, “The Lost City of the Incas”. Totally concealed from below it escaped destruction by the Spanish, and was only discovered by the western world in 1911 when an American explorer stumbled across the thickly overgrown ruins in their majestic setting high in the clouds. Surrounded by steep agricultural terraces and grazing llamas, the ruins consist of a central plaza, a sacred ceremonial area with intricately carved temples and royal tombs, palaces, stairways and perfectly balanced archways, towers, food storehouses, ornate fountains and water canals. Highlights of the site include one of the most famous Inca constructions, the sacred Temple of the Sun, with its distinctive round tapering tower and the centre stone that is illuminated by the rays of the sun every winter solstice. Huayna Picchu forms a dramatic backdrop to the city and a treacherously steep stone trail leads to a platform offering dizzy views of the city below and a sweeping panorama of the surrounding mountains and forests. Despite the continuous hordes of tourists the ancient Inca citadel preserves its sense of mystery and majesty, especially in the quieter hours after sunrise and before sunset, when the light and wispy strands of mist create an aura of isolated majesty.

Its wonderful setting, its many fine built temples and different sectors and terraces on top of a quite vertical mountain ridge make a visit to Machu Picchu an unfergettable experience. There are plenty of restaurants and hotels in in Aguas Calientes and its main attraction are the thermal

springs which gives Aguas Calientes (hot waters) its name. The outdoor springs are situated 15 minutes walk up from the town centre. They are fairly basic, with facilities to change and shower, and are used by the locals as much as the tourists, but it’s a great place to relax, buy a beer, and enjoy the views.

For the adventurous, there is the trek to Machu Picchu along the Inca Trail. Starting at Kilometre 82 (82 kilometres from Cusco along the railway to Aguas Calientes) this beautiful trek through mountain scenery, jungle cloud forest and past Inca ruins, is 43 km in length and takes 4 days to complete, arriving at Machu Picchu for sunrise of the 4th day. The maximum altitude along the trail is 4200m so you need to be acclimatized and fairly fit before you begin. Again there are many tour operators who have groups leaving regularly for the trail, accompanied by a guide and spending the nights camping.

If time or energy is a problem then the short 2 day Inca Trail offers an alternative to the full 4 day hike. The 2 day trail misses out on the best of the mountain scenery and starts further along the Vilcanota Valley at a place known as Km104, which is much closer to Machu Picchu. It’s a relatively easy trek walking uphill from Km104 to the Inca ruins at Wiñay Wayna. You then continue to Machu Picchu itself although you won’t have time for a guided tour. You then take the bus down to the town of Aguas Calientes where you will spend the night. The following morning you then return by bus to Machu Picchu where, if you are early, you can enjoy the sunrise, followed by a guided tour. Most people then take a late afternoon train back to Cusco.

There are many unanswered questions about Machu Picchu. Two intriguing aspects are of special interest:

1.- Why was Machu Picchu built?
Although the details of its past may be never be clarified, we can assume that its main functions were those of an administrative center for the production of the crops grown on its steep terraces and, at the same time, a religious center dedicated to the gods upon whom its inhabitants believed their existence depended: the God of Water and Mother Earth, or Pachamama, and, of course, the Sun.

Together with other agrarian centres in the Vilcabamba region, Machu Picchu must have been conceived within the context of a huge state project, the object of which was the extension of agricultural activity into the Amazonian Andes beyond Cusco. This hypothesis is based on the fact the in Peru land suitable for agriculture is scarce, both in the highlands and coastal Andes. Since the dawn of Andean civilisations, soils have proved inadequate in the face of growing population density, in common with all ancient societies that chose to live from agriculture. On the other hand, this ecological imbalance inspired the development of diverse strategies aimed at solving the problem of food production, including the expansion of agrarian frontiers.

Another factor has always affected food production in Peru and brought hunger to the people: the El Niño phenomenon, which regularly unleashes periods of drought and flooding, as well as other meteorological calamities. It was believed that such catastrophes could only be prevented through magical-religious practices: the worship of the God of Water, the most important deity in the Andean pantheon, present in the Apus or high mountains, who were called upon to fertilize Mother Earth by drenching her with its rains. These divine beings are still venerated throughout large areas of the Peruvian highlands.

2.- Why was it abandoned?
Several hypothesis try to explain why such an extraordinary place could be suddenly abandoned, as it was never found by the Spanish invaders:

With European irruption and the destruction of the Inca state, Machu Picchu and other Inca sites in the area were probably abandoned as its inhabitants were recruited by Manco Inca and his succesors from 1536 to 1572, to offer resistance to Spanish domination.

They sought refuge in the more remote Vilcabamba region, in the river basins of Vilcabamba, Vitcos and Pampacona-Concebidayoc. There is historical evidence to support this hypothesis, as such forced recruitments happened in similar areas, where the whole population followed Manco Inca.

The abandonment of Machu Picchu may also be explained by the death of Pachacutec and the construction of a new ‘royal estate’ for the next Inca, as was the custom. Other scholars suggest that the city’s water supply may have dried up. The truth about these crucial questions will probably remain a mystery forever.