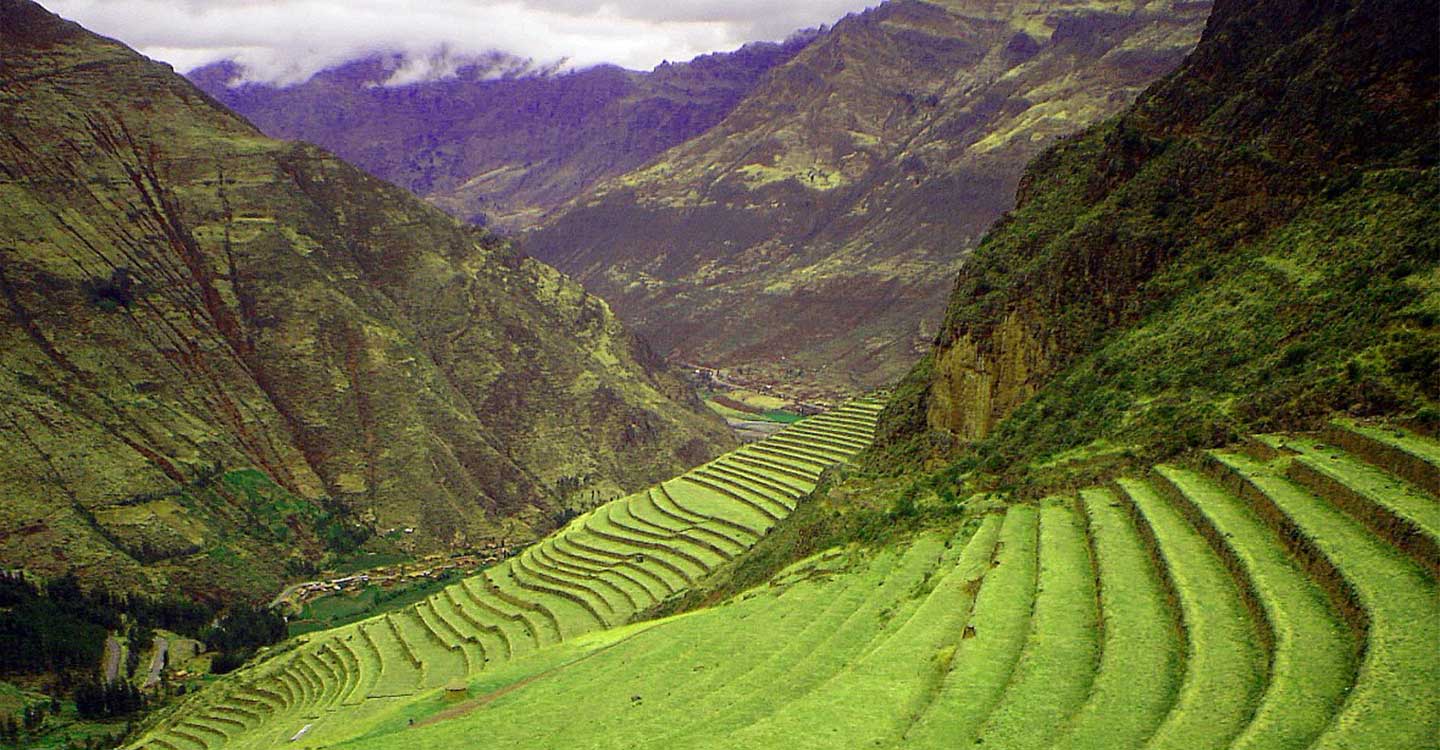 There are multiple places of interest in the Urubamba Sacred valley, making at minimum a full day and at best two full days (properly distributed over the correct days of the week) well worth spending. It is also a popular day trip with overnight going to or returning from Machu Picchu. At the eastern end of the valley is Pisac. Best know for its Sunday market, there are now smaller markets on Tuesday and Thursdays. There is also an impressive set of ruins and perfect terraces perched on the mountainside overlooking the valley. Mid-valley are the village of Yucay and the town of Urubamba, where most of the hotels in the valley are located.

Pisac market: At the eastern end of the valley is Pisac. It is best known for the Sunday colorful and lively Indian market. Crammed into the main square of this small town is a bustling market comprised of two parts. The local market for, of and by the Indians takes place in the streets around the plaza and is a constant scene of comings and goings. In the plaza itself is the handicraft market with a wide variety of textiles, carvings, jewelry, ceramics, pots and other items considered somewhere between art and stuff, all depending on your likes and dislikes. Another activity of tradition and importance is the Sunday “March of the Mayors” when the mayors of surrounding towns come together to march to the church, the leader blowing on a shell horn to announce the beginning of services. It is colorful, though often difficult to see as there is no pomp and circumstance to announce its happening and unless you are paying close attention, it’ll all be over before you are aware it is even happening. In addition to the big Sunday market, there are now markets on Tuesdays and Thursdays, and on other days as well.

Pisac ruins: There is also an impressive set of ruins perched on the mountain behind the town. You can walk up – one hour, uphill all the way – but this is not recommended. Better to go by vehicle with a knowledgeable guide who can put this set of ruins into proper perspective. Allow at minimum 2 hours even if driving both ways; allow minimum 5 hours if you drive up and walk down. The path goes through working terraces, giving the ruins a context. The first group of buildings is Pisaqa, with a fine curving wall. Climb then to the central part of the ruins, the Intihuatana group of temples and rock outcrops in the most magnificent Inca masonry. Here there are the Intihuatana (“Hitching Post to the Sun”), the temples of the moon and stars, solstice markers, baths and water channels. From Intihuatana, a path leads around the hillside, through a tunnel to Q’Allaqasa, the “military area”. Across the valley at this point, a large area of Inca tombs in holes in the hillside can be seen. The end of the site is Kanchiracay, where the agricultural workers were housed.

Ollantaytambo: at the end of the valley, was built on the foundations of an old Inca town, one of the few vestiges of Inca urban design that can still be appreciated. It had a great importance as temple and fortress. The Ollantaytambo ruins are a magnificent example of monumental Inca architecture. In Ollantaytambo there is also the valley train station to Machu Picchu.

Ollantaytambo is an attractive little town located at the western end of the Sacred Valley (about two and a half hours by bus from Cusco). The town has been built on top of original Inca foundations and is the best surviving example of Inca town planning. The town is divided in canchas (blocks) which are almost entirely intact. Each cancha has only one entrance (usually a huge stone doorway) which leads into a central courtyard. The houses surround the courtyard. Good examples of this construction can be found behind the main plaza. The town is located at the foot of some spectacular Inca ruins (entrance with the Tourist Ticket ‘Boleto Turistico’) which protected the strategic entrance to the lower Urubamba Valley. The temple area is at the top of steep terracing which helped to provide excellent defenses. Stone used for these buildings was brought from a quarry high up on the opposite side of the Urubamba river – an incredible feat involving the efforts of thousands of workers. The complex was still under construction at the time of the conquest and was never completed.

After Manco Inca was defeated by the Spanish at Sacsayhuaman following the unsuccessful siege of Cusco (1536) he retreated to Ollantaytambo. Francisco Pizarro’s younger brother Hernando led a force of 70 cavalry, 30 foot soldiers and a large contingent of natives to capture Manco Inca. The Inca’s forces, joined by neighboring jungle tribes, rained down showers of arrows, spears and rocks upon the unfortunate Spanish troops. In an intelligent move the Inca’s flooded the plains below their stronghold making it difficult for the horses to maneuver. Hernando, uncharacteristically, ordered a hasty retreat. Ollantaytambo became the only place ever to have resisted attacks from the Spanish.

However, their victory was short-lived when the Spanish returned with four times their previous force. Manco Inca retreated to his jungle stronghold in Vilcabamba and Ollantaytambo fell into the hands of the Spanish.

Chinchero: Another way to enter the Sacred Valley is taking the road from Cusco to Chinchero and to the Urubamba town. Chinchero is a wonderful Inca village with an impressive colonial church perched on it, and where there is an Indian Sunday market, more authentic then the one in Pisac. Chinchero is a small Andean Indian village located high up on the windswept plains of Anta at 3762m about 30km from Cusco. There are beautiful views overlooking the Sacred Valley of the Incas, with the Cordillera Vilcabamba and the snow-capped peak of Salkantay dominating the western horizon. Chinchero is believed to be the mythical birthplace of the rainbow. Its major claim to tourism is its colourful Sunday market which is much less tourist-orientated than the market at Pisac. The village mainly comprises mud brick (adobe) houses, and locals still go about their business in traditional dress.

The village may have been an important town in Inca times. The most striking remnant of this period is the massive stone wall in the main plaza which has ten trapezoidal niches. The construction of the wall and many other ruins and agricultural terraces (which are still in use) are attributed to Inca Tupac Yupanqui who possibly used Chinchero as a kind of country resort. Entrance to the main plaza and ruins requires a “boleto turistico”.

In the main plaza an adobe colonial church, dating from the early seventeenth century, has been built upon the foundations of an Inca temple or palace. The ceiling and walls are covered in beautiful floral and religious designs. The church is open on Sundays for mass. Half an hour’s walk from the village brings you to Lake Piuri which once fed Cusco with water. It takes about 3 hours to walk around the lake passing through small picturesque villages.

Maras & Moray: A very interesting tour, to be combined with Chinchero, includes the picturesque town of Maras and to the archaeological site of Moray.

Maras is renowned for its colonial doorways having been an important trading town for the open pit salt mines nearby. The salt mines have been exploited even before Inca times and during the colonial time; it was the largest salt producer in the southern highlands. Moray is an Inca construction shaped like a series of four amphitheatres, in fact fine terraced natural holes. It is said that the area was used to acclimatize plants and to domesticate them.