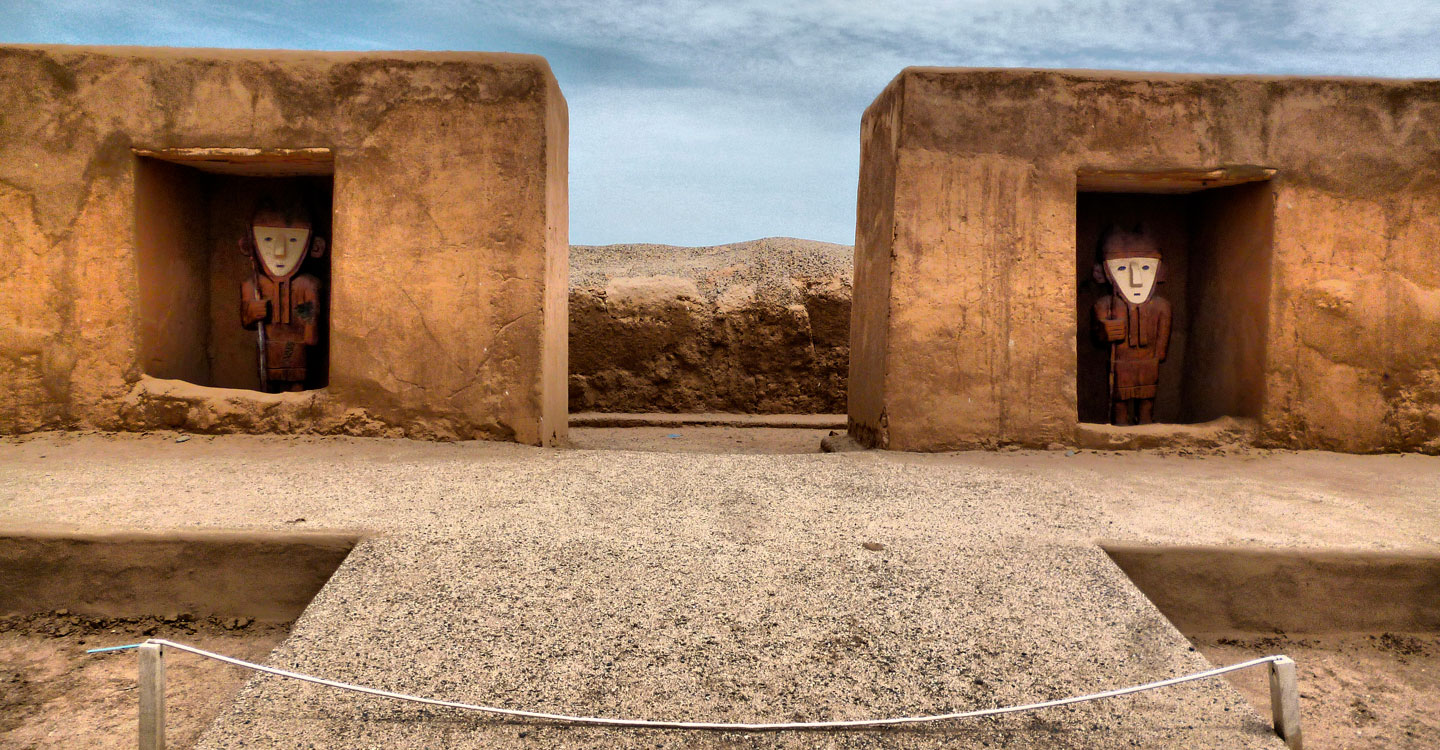 Trujillo is also the starting point to visit the city of Chan-Chan, the religious and administrative center of the Chimú culture and the largest mud city to have been discovered.

For anyone with even a remote interest in archaeology, the area around Trujillo is unmissable. The famous site of Chan Chán is a must, but even more interesting are the sites of Huaca de la Luna, Huaca El Brujo and Huaca El Dragón, where amazing Moche friezes still survive. The Moche temples have not survived well, as the ravages of time and the greedy hands of fortune hunters have damaged the structures’ mud bricks. However, the ruins are still of great interest, especially for the wonderful colour friezes which survive, such as those at the Huaca de la Luna and Huaca El Brujo, both near Trujillo.

The decline of the Moche culture led to the rise of many other cultures on the coast, the most important of which was the Chimú culture, based principally around Trujillo. The most important Chimú site is the UNESCO World Heritage Site of Chan Chán, near Trujillo, the world’s largest adobe city. Here, beautiful mud-brick palaces and temples can be visited, many of which have survived in remarkable condition.

Travellers to Peru who do not visit the north coast, or only see it through the windows of a bus from Ecuador to Lima, are missing out on one of the most fascinating areas of the whole country.

The City of Chan Chan, Capital of the Chimor Realm, is one of the best examples of the architectonic development reached by this Culture. The largest mud city in the pre-Columbian Americas is divided into nine citadels or palaces, conforming autonomous units that extend over an area of 20 square kilometres.

When entering the City and walking around its plazas, houses, deposits, workshops, mazes, roads and pyramidal temples, you will be able to sense the strength and temper of this people, which still remains in the environment and is also reflected in the decoration of its walls in bas-relief. UNESCO included it on its list of Cultural Patrimony of Humanity in the year 1986, and travellers from all over the world reckon that its grandiosity can only be matched by the archaeological remains of Teotihuacan, in Mexico, or by the ancient cities of Egypt.

The origins of the city go back to the beginnings of the first millennium AD when the first large enclosure, probably the Ciudadela Chayhuac, or Chayhuac Citadel, was built. Subsequently, many more ciudadelas, eleven in total. By the time the Inca conquered the Chimu domain, around 1470 AD, the capital was the center of an empire that covered a stretch of 621 miles of the Pacific coast and controlled about two-thirds of all agricultural land ever irrigated along the Pacific coast of South America.

Agriculture was a major concern of the Chimu, who built many miles of irrigation canals, including inter-valley canals, to expand the area under cultivation. A long canal was built from the Chicama River to the north, in order to irrigate farmland near Chan Chan in the Moche Valley. The enormous area harvested in the Moche Valley in prehispanic times still surpasses the area currently cultivated.

The archaeological site is characterized by very tall walls, some of which are 26 feet high, which enclose each of the 11 citadels. Together with Huaca Obispo, Chan Chan’s largest stepped pyramid, which lies at the north of the city, they form the bulk of the monumental architecture at the site. Each of these palaces, most of which are laid out in a very similar fashion in spite of the differences in size, are characterized by three types of structures: U-shaped audiencias, storerooms and wells. In general terms the site’s high walls, long corridors, tortuous, winding passageways, and small entrances show how meticulously the regime controlled the flow of people within the enclosures.

The U-shaped rooms called “audiencias” are found in varying sizes and are interpreted as the administrative offices of the Chimu elite. Some are decorated with elaborate clay friezes that represent shellfish, stylized waves, marine birds and fish. On frieze, for example, represents a reed boat adorned with a cormorant and a giant squid about to gobble a fish.

The extensive storerooms, which have a capacity of 2,000 square meters, were found empty. Archaeologists, however, were able to find traces of manufactured goods, including the imprints of textiles, for instance, which probably were stored in these rooms until their removal around the time of the Inca conquest. The value attached to the items stored here is apparent by the controlling position of the audiencia-type building that one must pass in order to access them.

If the capacity of the Chan Chan storerooms is examined, it becomes evident that, unlike the Inca, they did not store huge amounts of staples; the available storage space is far smaller in comparison. On the contrary, they appear to have specialized in producing and trading small, but valuable, luxury goods possibly used as status symbols by distant lords. lt is quite possible that the marine scenes depicted on audiencia walls are linked not only to the realm of myth and ideology, but also to seafaring, a practice probably engaged in daily by Chimu fishermen and traders.

Another recurrent feature of the ciudadelas of Chan Chan is large, deep, walk-in-wells. Today these have dried out completely due to the lower water table, which has led, in turn to a smaller area currently under irrigation and modern-day water extraction with mechanized pumps to supply the expanding city of Trujillo. This lowering of the natural water table has also desertified the ”sunken gardens”, where the produce consumed by the inhabitants of Chan Chan was grown. By digging large, deep trenches until the surface was moist enough to sustain agriculture, the agricultural frontier could be further expanded into areas near the coastline, like the area southeast of Chan Chan. A similar method is used by some traditional fishermen of the north coast of Peru to grow the totora reeds necessary for making their famous, slender reed boats.

Some scholars have tended to link the individual compounds with a list of rulers written down by Spanish historians in the sixteenth century. Others however, stress the possibility that all ciudadelas functioned at the same time, with competing nobles and their families living in each one of them.

Evidence in favor of the “one king – one palace” theory carne from the excavation of several highly disturbed platforms found within the citadel enclosures. Clearing the debris left by intensive colonial looting, or “mining” as it was referred to then, a T- shaped tomb was found to have been at the center of the burial platforms. The people buried in these enormous tombs were accompanied in the grave by elaborate offerings of textiles, ceramics, and metalwork. The bones of dozens of women, found around the central grave, may point to large-scale human sacrifice. Apparently, their descendants, who continued to run what could be called the “Royal Mausoleums”, used the compounds that contained these burial platforms for long periods after the death of a ruler.

The commoners of Chan Chan lived outside of the compounds, and were probably forbidden to enter them, right of way being a prerogative of the nobility and their retainers. Most of the artisans, fishermen, farmers and laborers at Chan Chan resided in what archaeologists have dubbed “intermediate architecture”- structures smaller than monumental compounds, but generally more complex than simple huts. This intermediate architecture housed the estimated 12,000 artisans working at Chan Chan.

The total population of the city may well have been as large as 50,000 or more, although strong seasonal fluctuation is suspected.

Judging by the city’s tax records, the colonial looters must have found formidable quantities of precious metal in Chan Chan. Although large scale production of ceramics, textiles and woodworking as well as maize-beer preparation are all in evidence, the Chimu appear to have concentrated their craft production around metallurgy. In this respect the conquest by the Inca (around 1470 AD) may well have broken the backbone of the Chimu economy. The Inca forcibly transferred to their capital in Cusco the highly skilled metalworkers of Chan Chan. Colonial chroniclers report the legend of Tacaynamo, also called Chimu Capac, the mythical founder of Chan Chan “who came from across the sea, to rule the land”. These same chroniclers reported that the Chimu conquered the Lambayeque region, where the Sicán culture flourished, sometime around 1200 AD. Evidence of large-scale mining and smelting has recently been found in the Lambayeque region at the site of Batán Grande. 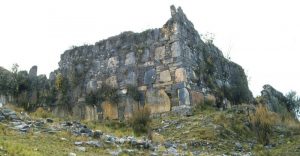