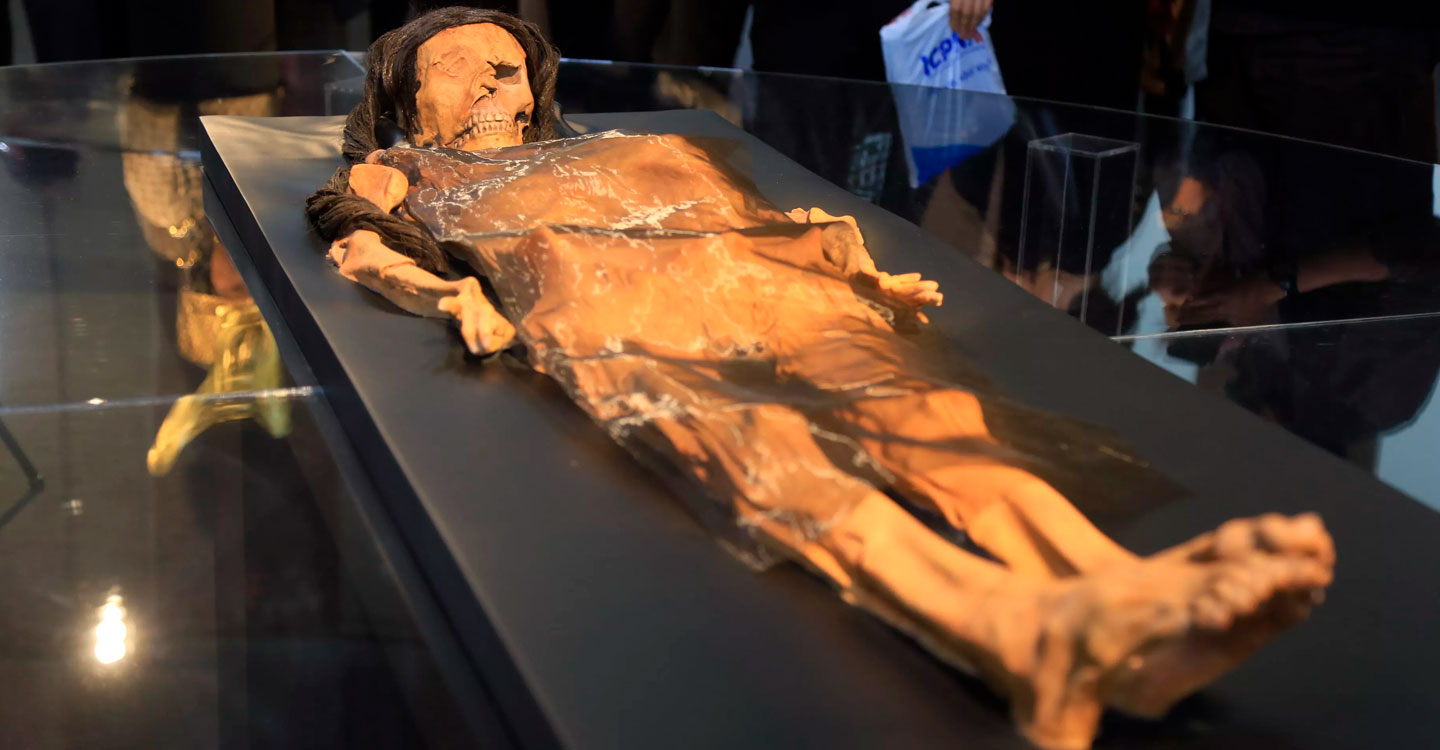 “Huaca Cao Viejo” is an archaeological site dating back to the Moche culture (100 BC-650 AD). It is a badly damaged, stepped pyramid with a central court that was probably used primarily for religious ceremonies. This pyramid is undoubtedly the most impressive Moche site in the Chicama Valley and is nowadays more often referred to as “Huaca El Brujo” (“The Sorcerer”). This current name is due to the common practice of shamens of the North coast (who also are called “brujos” or “curanderos”) to hold some of their healing ceremonies at prominent hills or prehispanic ruins, which they consider to be places of power.

This huaca or “ancient place” lies very near the sea, close to the small fishing village Santiago de Cao, on the right hand margin of the Chicama River. In one of the most important Moche sites in this large valley of the north coast. This valley lies immediately north of the Moche valley that was the location of the presumptive capital of the Mochica polity, where we find the HUACA DEL SOL Y DE LA LUNA COMPLEX. Many more sites of the Moche culture are known in the lower and middle sections of the Chicama Valley, such as habitation structures and ceremonial platforms. One also can find major in the Chicama Valley major sections of a large and very complex prehispanic irrigation system, parts of which are still in operation today. This irrigation system may well date back to the Moche period. The currently-visible structure called EL BRUJO rises about 98 feet above the surrounding desert and covers an area of roughly 330 by 330 feet (Figure 4.1). Probably there are many simple wattle-and-daub structures still buried beneath the sand that surrounds this stepped, truncated pyramid, which itself was built with tens of thousands of adobe bricks. The dimensions measured today, however, must be seen as the product of at least seven building phases. During each of these phases, the central central building would have undergone extensive remodeling and expansion. The extraordinary, painted reliefs preserved at Huaca Cao Viejo owe their current excellent state of conservation not only to the extremely dry climate of the Pacific coast of Peru, but also to this tradition of building over the older structures.

The famous mural ornamentation was discovered accidentally by local “huaqueros” (grave looters), who reported the find in 1990 to a prominent Peruvian banker interested in archaeology. Since then, this philanthropically-minded banker has funded excavations and excellent research and conservation measures.

The polychrome reliefs worked onto the clay plaster can be attributed to the different building phases, although most of them are contemporary with the last one, immediately before the building was abandoned for reasons as yet unknown. On the main northeast facade of the building the rubble covering the original plastered and painted walls has now been cleared to reveal many painted figures in high relief.

The oldest figures appear to be intricate geometric patterns with snake-like characteristics painted in red and yellow, which can be seen on the left-hand side of the third level of the frontal (northeast) facade. Immediately to the right of these motifs are visible traces of what the project director considers to be the representation of a stylized fish. In front of these figures, one step down the pyramid, a contemporary group of reliefs, dating to the fifth construction phase, are painted in white and yellow. These reliefs show the profile of a sacrificer, a protagonist common to Moche iconography, holding an infant by the hair with his left hand, and a ceremonial tumi-knife in his right hand. This depiction, referring to human sacrifice by beheading, is somewhat unusual in that normally the ones to be sacrificed are captured warriors.

On the lowest level, next to the central court, one can see a depiction of a group of ten naked men linked together by a rope around their necks. They appear to be the typical captured warriors, and it appears that a victorious group following these captives carries their captured weapons. A fully-clothed Moche warrior apparently leads these prisoners, who are painted on a white background, towards an intriguing little room on the left hand corner of the court. The walls of this room and of the associated terrace are covered with small, polychrome reliefs. Forty-eight fighting warriors, each with a different headdress and clothing, are seen on four rectangular panels on the southeast wall of this room and probably refer to ritual combat, an Andean practice the Moche seem to have upheld for centuries. This practice is still practiced, in a very different fashion, by a few communities of the southern Andes. The complex of small, interrelated scenes on the other walls of the room depict peaceful, less war-like motifs: animals, plants and net-fishing are among them. Studying and comprehending this highly unusual complex of reliefs is a task not yet completed.

One step above the procession of warriors and prisoners, an incomplete group of figures stand out in front of a blue background. These front-facing figures appear on a contemporary wall built over the reliefs of the child-sacrificer and wear clothing unlike that of the warriors. They are wearing elaborate headgear and earspools, a sign of high status. The yellow circles on the clothes of some of them probably depict golden discs sewn onto their long red shirts. They hold each other by the hand and look towards the central court, where elaborate ceremonies surely were held.

On the highest preserved level corresponding to this last phase of construction, the murals have been badly eroded, but a ceremonial knife is clearly visible in the hand of a figure with two spiderlike appendages against a red background. According to the looter who first discovered the decoration on the walls of this huaca, this figure was complete even when he found it. He described it as having prominent, bulging eyes, a flat, wide nose, thick lips, large, and protruding canine teeth, and was wearing two earspools and holding a human head in his left hand. It seems clear that the sacrificer was one of the most important figures of the iconographic complex found at EL BRUJO, maybe even the chief deity.