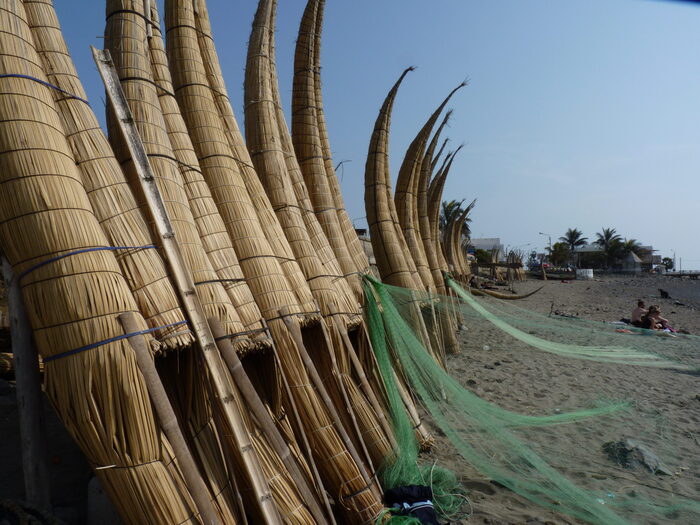 Trujillo is Peru’s third-largest city, and was also one of the first to be founded by the Spanish. When Pizarro founded the city in 1534, he named it after his hometown in Spain. It is the capital of the La Libertad department, an important sugar cane growing area.

Trujillo remained a centre for resisting central authority, and the city became the centre of the left wing APRA (American Revolutionary Popular Alliance) political movement in the 1920s. The APRA founder and leader, Victor Raúl Haya de la Torre, who was from Trujillo, claimed victory in the elections of 1931, although General Sánchez Cerro won the count. Claiming fraud, APRA supporters in Trujillo rose up in protest against the new government, and went on the rampage, killing many officials. In a brutal crackdown, the government arrested many of these supporters, took them to the ruins of Chan Chán, and executed hundreds of people. Haya de la Torre was imprisoned on the notorious El Frontón island and the APRA party was outlawed.

Despite this political oppression, support for the APRA party remained strong throughout Peru, and especially in Trujillo, and the party finally won a national election and took power in 1985 under the leadership of the eloquent Alán García. Although many Peruvians and international commentators consider much of his presidency to have been a disaster, Alán García, and the APRA party, nearly came to power again in the elections of 2001, following the flight of President Alberto Fujimori. They finally won the elections in 2005, and Alan García is again President of Perú.

Trujillo is an elegant, attractive city, and it makes an excellent base for visiting the nearby archaeological sites. Although there is the occasional whiff of fishmeal from the nearby factory at Puerto Salaverry, this is rarely troublesome.

Trujillo has quite an interesting colonial centre with many churches and mansions. The whole centre used to be walled, and Av. España now marks where the wall used to stand. There is a section of the wall still standing on the northern part of Av. España. The large Plaza de Armas is surrounded by attractive colonial buildings with beautiful wooden balconies. There is an impressive statue of La Libertad (freedom) in the centre of the Plaza. The churches are quite different from some of the more ornate examples in Lima, Arequipa and Cusco, for example, and the facades are rather austere. The most interesting church is the Iglesia del Carmen, which has a small gallery of colonial art, thePinacoteca Carmelita.

Trujillo has many elegant colonial mansions, including the Casa Banante and the Casa de Emancipación, which is used for exhibitions.

There are several beaches near Trujillo, the best of which are at Huanchaco and Playa Las Delicias. Huanchaco is a beach resort, a little over 10 kilometres away from Trujillo. There we can see the light “reed horses” (caballitos de totora) cleaving the surf. These traditional rafts made of reed (Scirpus rigidus) are used by fishermen of the Northern coast since pre-Columbian times for their fishing labours. But if visitors are surfers as well, they can not miss Chicama. This beach is located 74 kilometres Northwest of Trujillo and it is renowned for having the longest left wave of the world. This port was the disembarking point for the African slaves brought in to work at the haciendas of the Coast during the times of the Colony.

There is also a well kept Golf Course nine holes in Trujillo. Golfers with handicap are accepted previous coordination.